Our game is starting to look play ready now!  For me that means that the last characters need to get implemented. The ones that are left to do are the wedding guests, that väinämöinen summons with a spell (no idea why it had to be wedding guests particularly ) to help them rowing the ship. The forge workers that I worked on the two last weeks and a woman spinning clouds in the air. After that everything is done and ready for GGC on my part :)

This week I worked on the wedding guests and started with the making of a woman inspired by findings from the iron age grave findings in Finland. I decided to add some flowers in her hair and a bouquet in her hands for for the wedding. The hairstyle is based on old photos I found when searching for inspiration pictures.

The style of the character continues to follow the previous ones with big eyes so the expression will be visible on the screen and soft shading.


Here is the finished model. 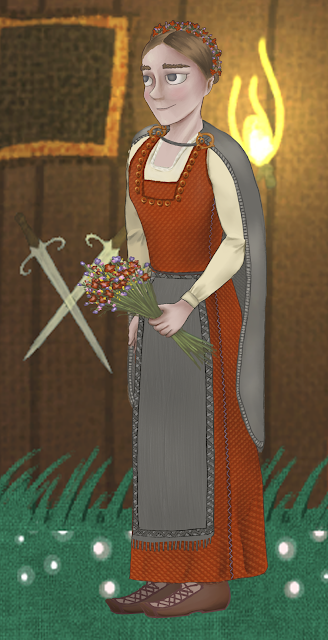 I also worked on some characters for the pictures that we will use in our trailer, our lead artist have made the enviroments. 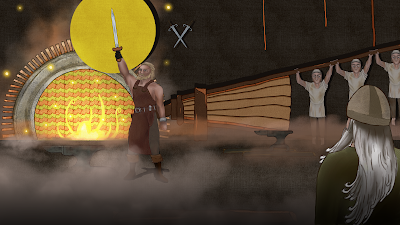 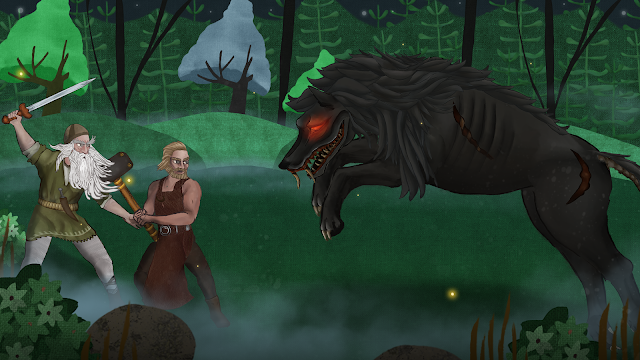 There is not much time left now until GGC(Gotland Game Conference) and our team is working hard to finish all the assets in the game. Most of our characters and Npcs are animated and implemented and this week my frog boss got implemented as well.

The frog boss is a huge creature living inside a talking ship that Ilmarinen and väinämöinen need to use to get over the water. The ship wont let them sail with it until it got cleaned of all the small frogs and the frogboss inside it.

When doing the frog boss I imagined the creature to be this huge fat frog king that took over the ship and sending all his frog minions to feed him while he just lazy inside of his ship kingdom. I also wanted him to look like he had almost lost his ability to jump due to his frog legs being so fat and heavy.
And I wanted him to have this huge mouth doing a tongue attack on the players.

At first the frog boss was brown with red poison bubbles since I felt that red is usually a good color to symbolize danger. But when I checked the frog with the background scene it just did not fit so I decided to make him green and more frog like with orange poison bubbles on his back. 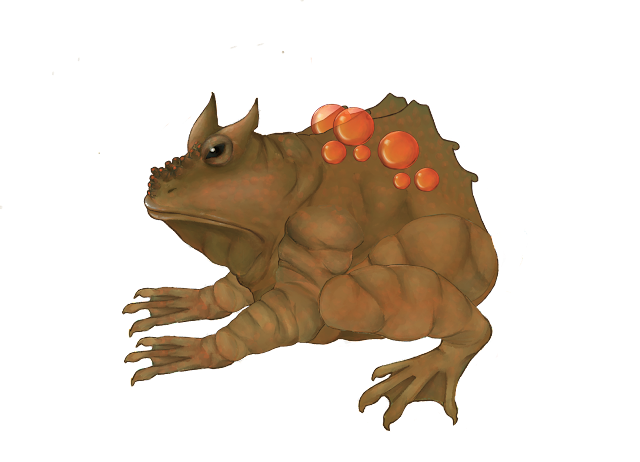 Also finished the workers that are going to be in Ilmarinens forge. 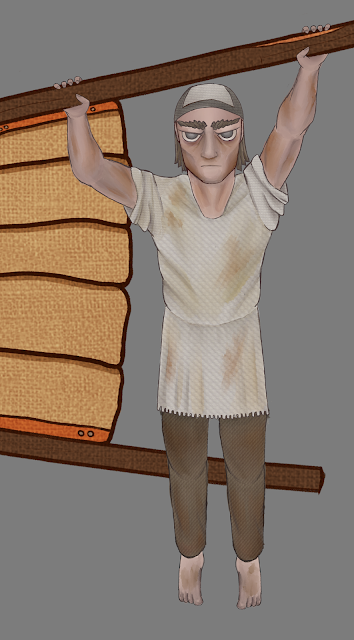 When doing the frog minions I looked on alot of reference pictures to get the anatomy about right and after that I designed after own choice. I tried to keep it simple and soft in the coulouring but wanted to give the frog minions a bit more outstanding features like the spots on the skin and a blue coloring. I also decided to add some round poison bubbles on its back. In game they might get a glowing effect.

As for the wolf I had to remake the model alot. The anatomy just did not work on the previous sketch model so I studied plenty of dog and wolf anatomy pictures and re made the model after that. The spritesheet needed some re make aswell to make the different body parts fit together when our animator did the animations.

Here are the final results :) 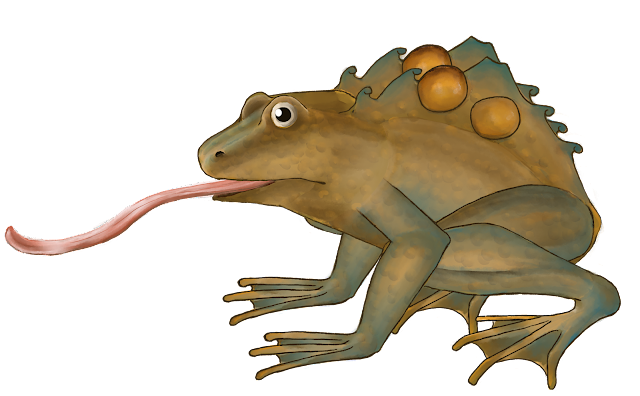 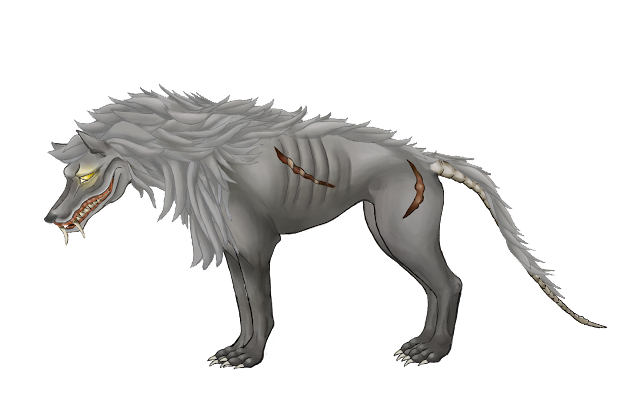 The weeks fly by very fast now, and we are slowly getting closer to GGC and the end of the course.
At the third week of the course I have finished Ilimarinen, done some rough sketches on the wedding guests that will appear in the game, worked on some frog concepts and started to finalize the wolf monster.

I have tried to keep a consistency in the art style with a soft shading and a hard outline.
Ilmarinen is the master blacksmith and a god in the kalevala epic and he is our other main character that will be playable in our game. I have been Inspired by Tove jansson and moomin trolls while creating both characters but I have tried to still keep an own art style. For the weapons on ilmarinen I have used textures and I have also used textures on the clothes as I did with Väinämöinen.

Here are some work from the week. 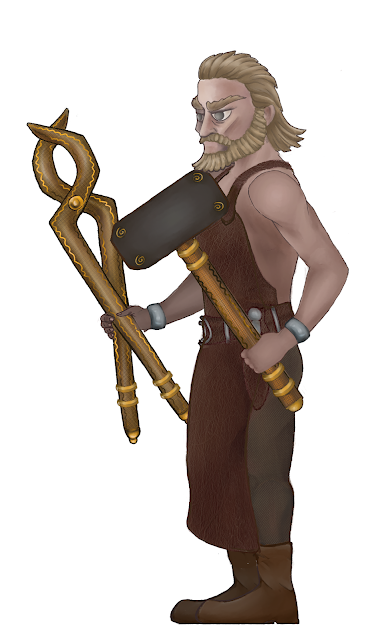 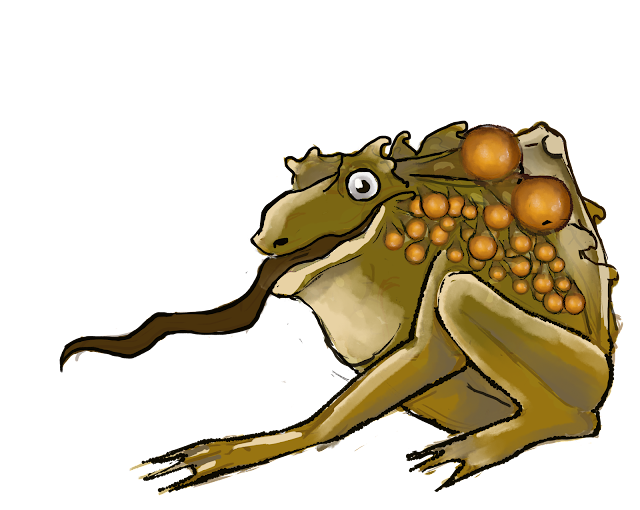 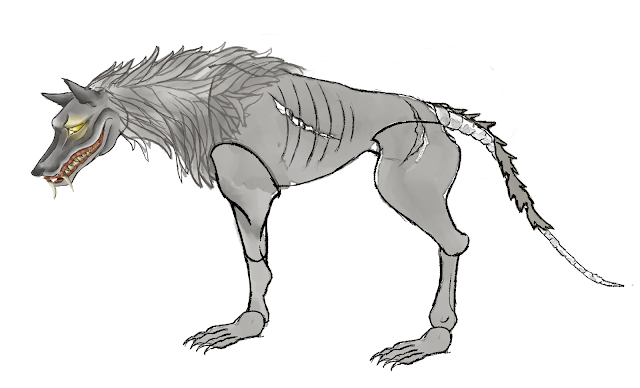 In the second week of Big Game Project I continued to finish one of our main characters Väinämöinen. At first I was planning to finish the second main character and the wolf monster as well but I had to remake väinämöinen so many times that it was no time left for the other two.

When making väinämöinen I started with looking on different facial expressions to try to get a believable character that would fit the description of being old and wise as well as having a lot of stamina and fighting spirit.

Since the old sketch of väinämöinen looked to old and sad I focused on making him look a lot younger and angrier.

I used a lot of soft coloring and shading when I made the skin and I used different textures for the clothes. I also putted a strong dark outline on the character.

When I felt that the character was done I divided all the different parts on a sprite sheet for our animator.

The feedback I got from a meeting with an art teacher was to make the sword look a bit more special and mythical, so I will focus on that later when the rest of the characters are done. 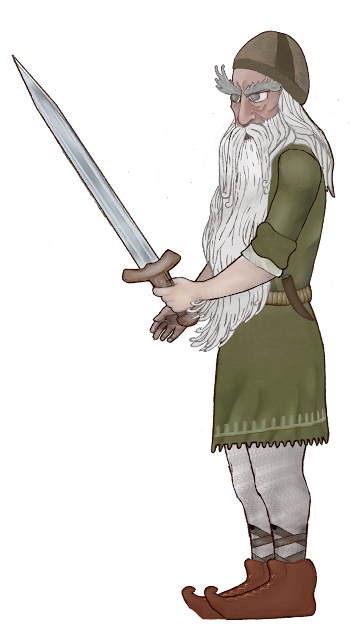 So this week our class started our Big game project course. My group are making a game called Kalevala which is based on an old finnish national epic containing 50 different rune songs. I am responsible for character art. We are going for a quite simplistic style with inspiration from finnish artists such as Tove Jansson and Joseph Alanen.

Here are some of the concept sketches and early 2d characters I made :) 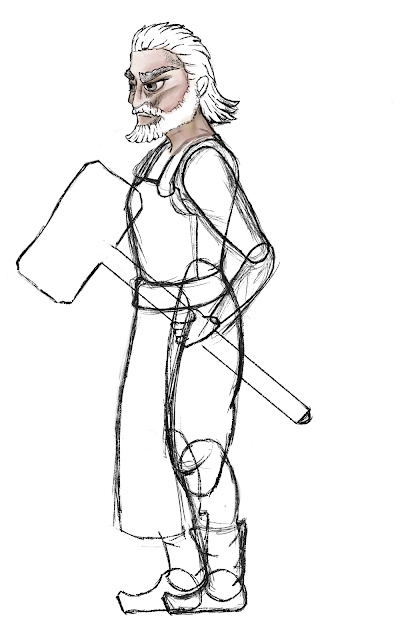 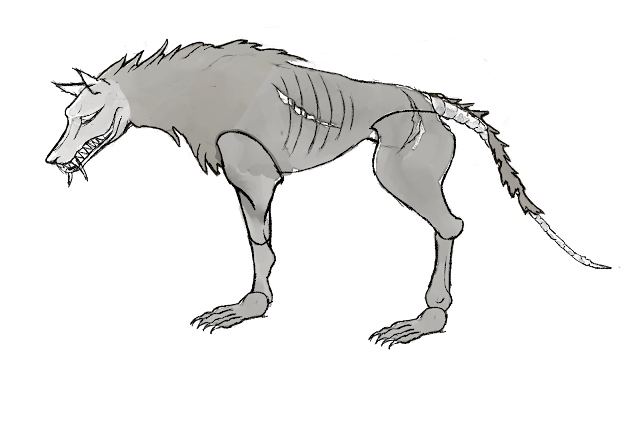 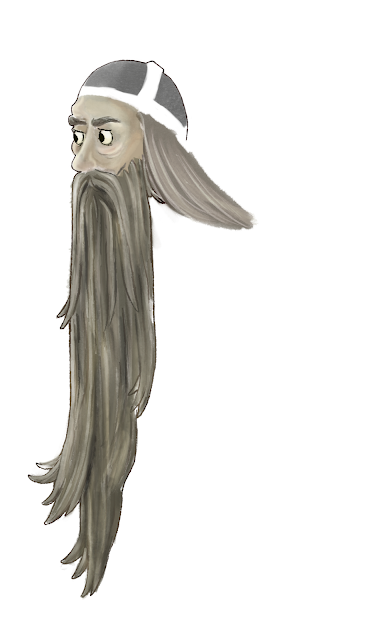 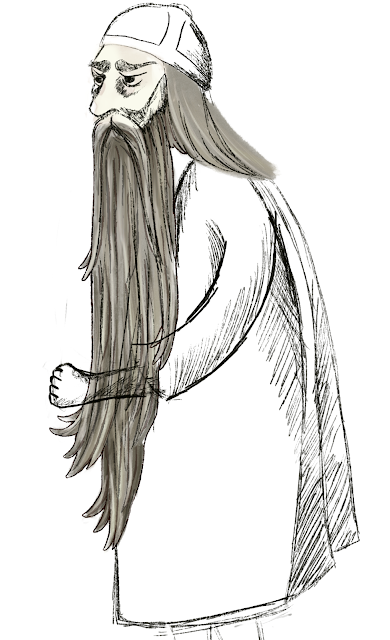 So our game project is coming to an end and most of the graphical part is finished for our final version. Even though it feels like we could have done so much more if we would have the time, I feel happy and very proud about of own and first made game for the game designer education.

So this week I am going to write about my work on the menu screen. For the beta I did a menu screen with a simple font. I used a moon and sky artwork that Lisa in my group had made for the outdoor level in the game that sadly never got finished due to the time limit. On top of it I drew some simple forest trees and added some shadows . The menu screen had the options “Play”, “options”,  “credits” and “quit game”. The menu screen was enough for the beta but now when we are working on our final version of our game we wanted it to be a bit more suiting. 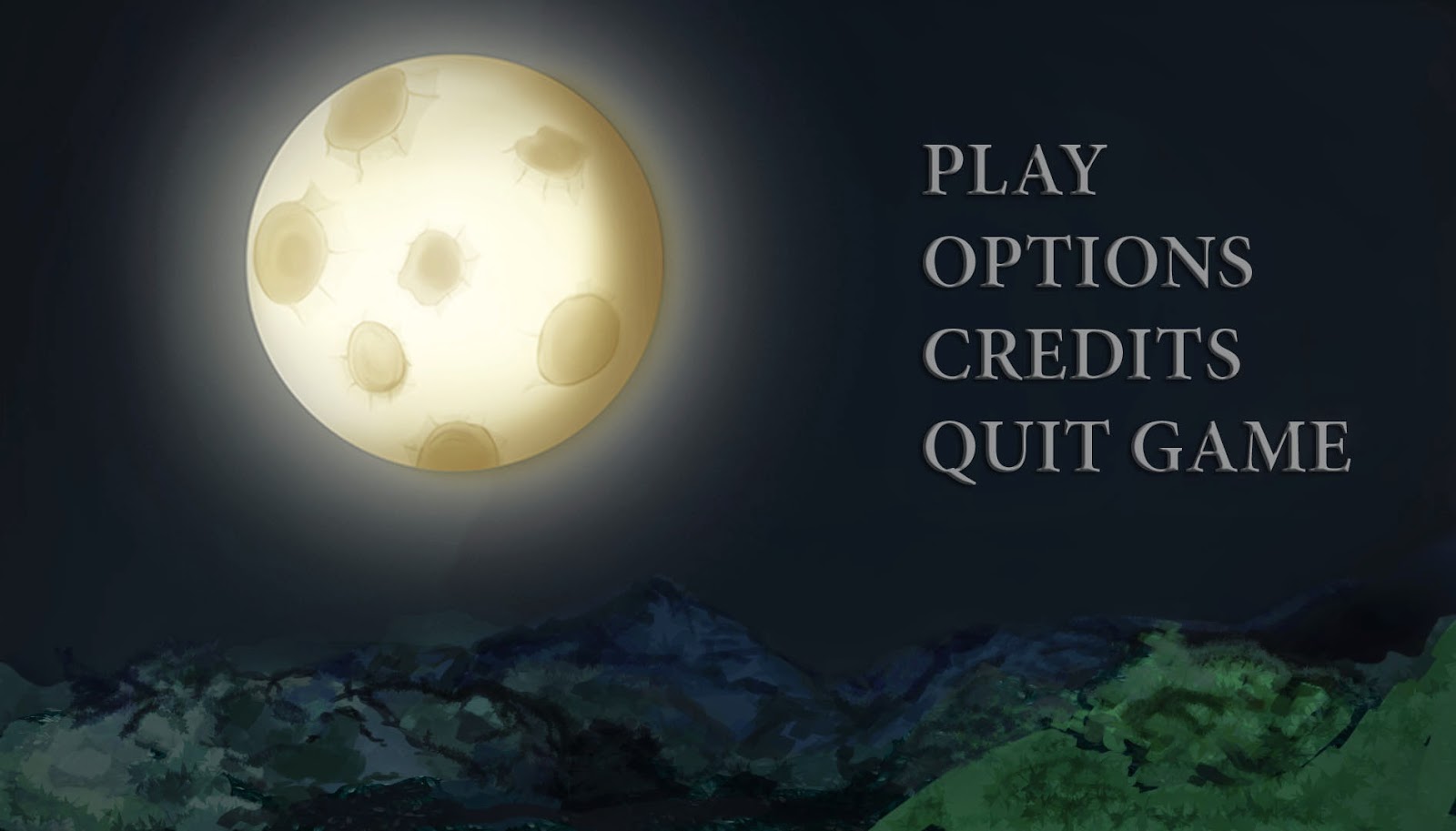 When I started on the final version of our menu screen I was thinking that some clear bluish colors would fit very well since the gameplay is consisting of colors in different blue shades on the cave level that the player fly through. Therefor I decided to go with one of Lisas other background pictures with a forest and a cave. The colour theme for Lisas picture was in turquoise and greenish shades which fitted together with the colour scheme in our game.

My first vision was a very colourful and clear background that oozed of blue mist and a clear crisp sky with stars but after some communication together with the group we decided that the strong blue hue was clearly out of the colour range from the rest of our games colours. So I then started to experiment with the turquoise colour combined with the darker clear blue and it gave quite a nice effect.
I started to work on our logo and realized  that black did not seem to fit together with the rest of the colours and I wanted it to stand out more so I changed the logo to white. I then added some effects called “Bevel and Emboss” and “Drop shadow” and changed the shadow effect until it met my groups expectations.

When I started to work on our game menu text I tried a lot of different fonts and after around 17 different options I decided to go with the font “Papyrus Regular”in size 18 pt.. I added the same effects as for the logo and putted the menu text to the middle under the logo. We had decided that we was not going to use the "option" in the game menu text and instead have a "highscore" option so I changed that.

After that was done I started to work on the details. I added some stars in different sizes across the menu screen and I painted some mist. I then worked on the saturation and shadows and I used tools such as “dodge” and “burn” to get a more glowing effect to the stars and for getting shadow edges around the menu screen to focus the players eyes more to the middle. I also painted some shadows with the "burn" tool on areas where needed and some glow effect with the "burn" and "dodge" tool where it was suited.

When I was happy with the look I experimented with where the logo and text would best be placed. I first placed them on the left side of the screen but later decided that middle seemed to give the player a more balanced visual.
As a last effect I added one of the fireflies made by Lisa, to work as a mouse pointer and I also duplicated it four times to get it to show more in contrast to the background.

Background picture made by Lisa: 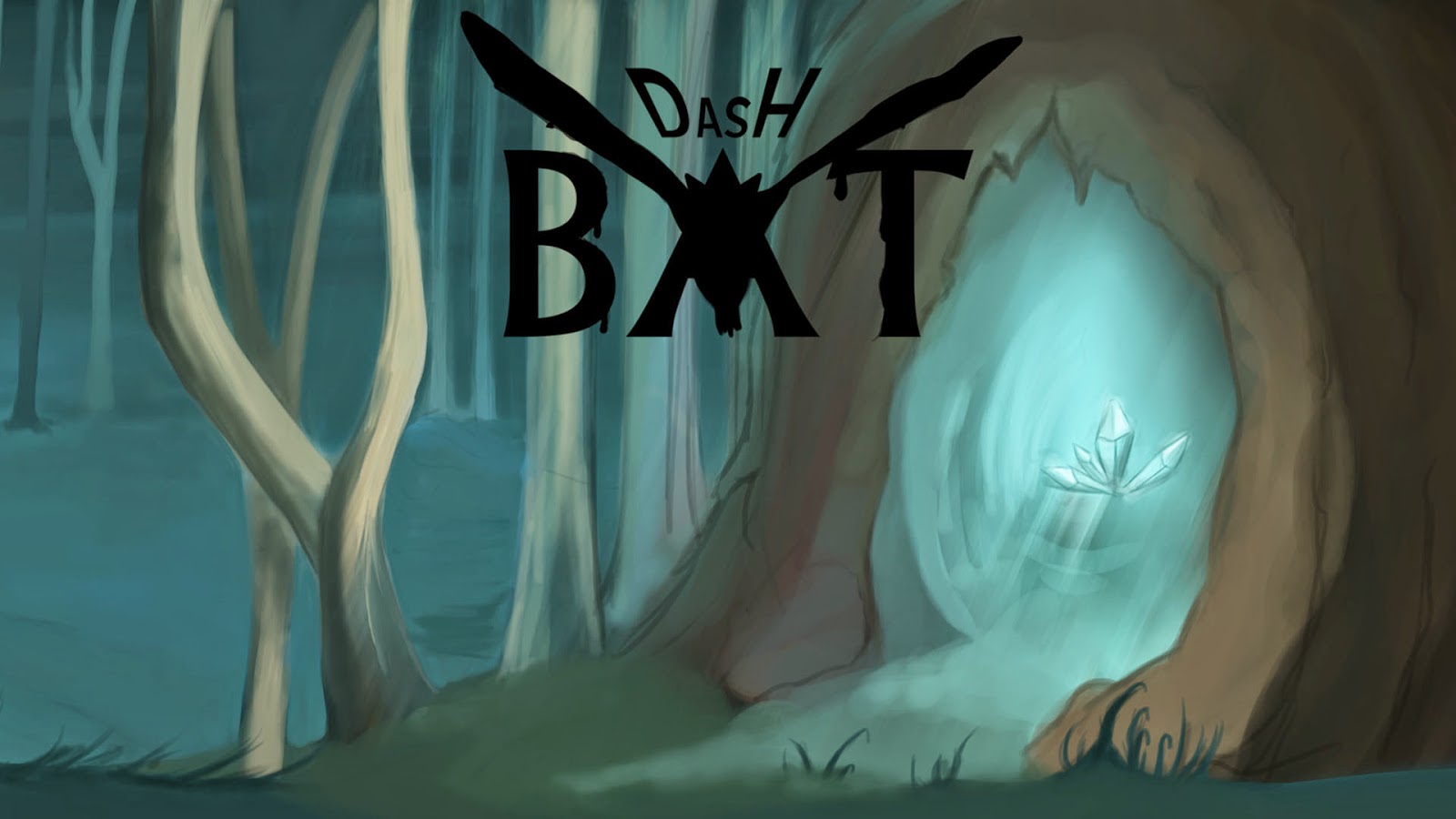 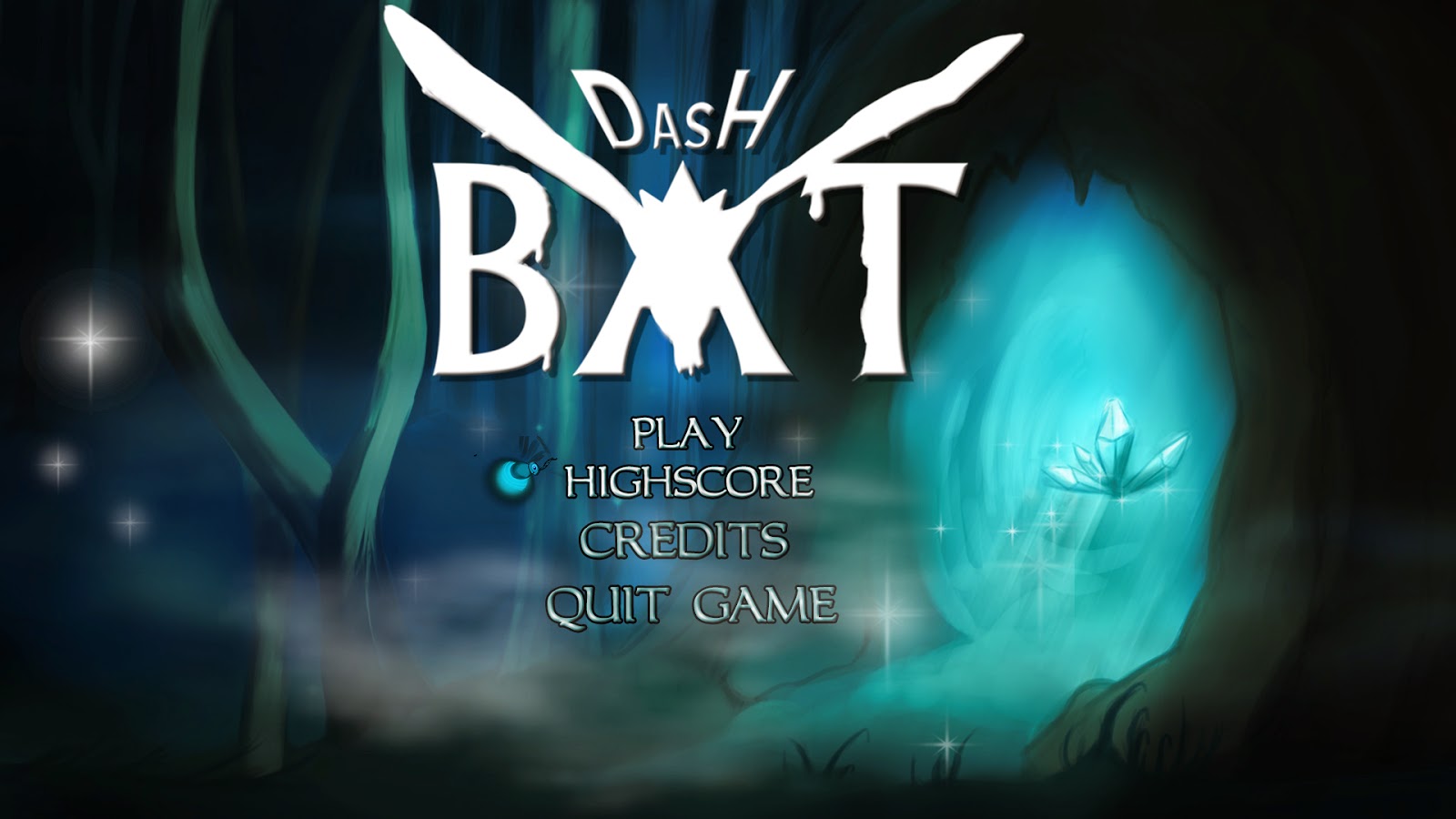